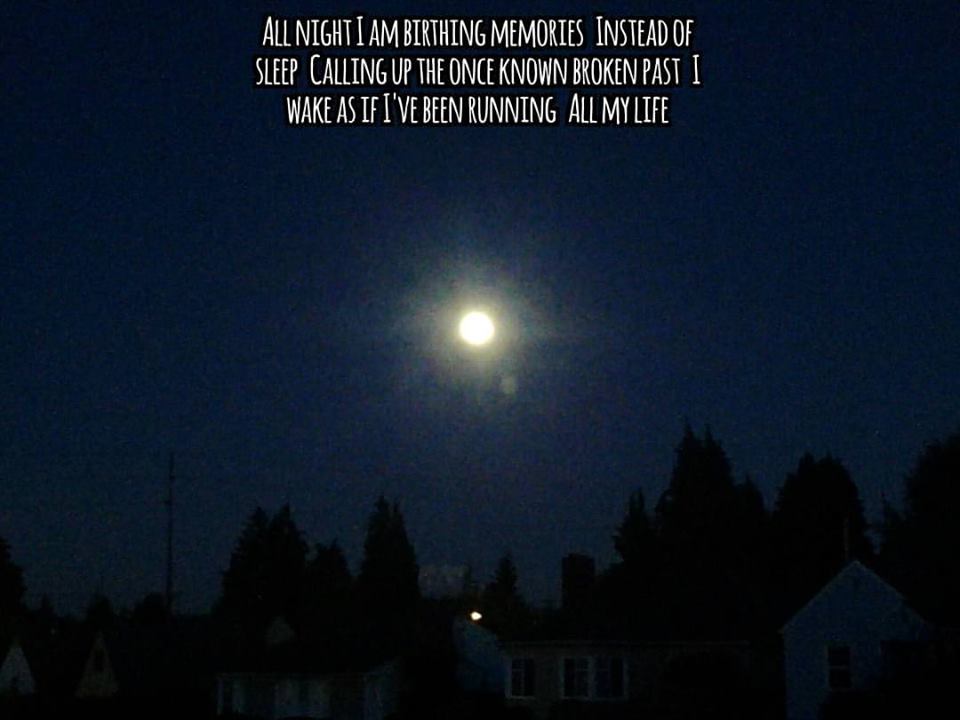 Last week I began telling the story of Ancestral Trauma as it has played out in my life as a Black Womxn in America. I continue the story here:

One of my daughters has developed a practice of calling or emailing me every three to five years. This began about 10 years after I divorced their father. By this time she had stopped communicating with me for the most part, by her choice. The narrative that she had adopted was and continues to be one in which her father was not the alcoholic abuser who physically, emotionally, and sexually mistreated his family. He was no longer the racist, anti-black, mysogynistic, and homophobic autocrat. He became the victim of my crimes against him. And blame, which must always have a sacrifice was firmly placed, in her mind, on me. She was, as were all of my children, gaslighted and manipulated in the insidious ways that narcissists employ to get others to choose the only side that is acceptable to a narcissist. She chose.

A few months ago I had reached out to my daughter trying to find her older sister, who has been missing since last March. Another story for another time. Not expecting an answer, I was grateful when she replied. Another few months passed and she messaged me to give me more information about her sister. I thanked her and left the door open for her to stay in contact. A few weeks ago, she messaged saying she need to talk to me. I said yes, even though I thought I was in for the usual litany of accusations and blame sprinkled with insults and various versions of “you ain’t shit” and “you ruined our lives” with a unhealthy dose of “you were a terrible mother.” I was not disappointed.

The details of the conversation are not important. What is important is that I see in a heart-breaking clarity how I modeled for my children, my Black girl children, how to give away their power and agency to a man under the guise of love. They had 20 solid years of watching me accept being gaslighted, spun up, abused, disrespected, and denegrated by a white man who had painted himself as liberal, open-minded, kind, compassionate and empathetic, and who was the polar opposite of those attributes. I can understand how my leaving, finally, in order to survive looked to them like I was ungrateful, hateful, and hurtful. I can understand why they adopted his narrative of terrible mother because the weak submissive creature I had modeled for them with their father was their foundation for how a mother is supposed to act. I understand how agency finally owned, when never exercised before, can look like abandonment.

I live each day with the marks of my own demons on my soul. I spend my breaths in making amends for all the harm I did to my children through my blindness, my weakness, my unknowing, and my ignorance, all of which was planted and steeped in internalized white supremacy and oppression. I have relived and owned every misspoken word, every curse, every spanking, every co-sign on to and every punishment or neglect doled out from my brokenness. I have also held fast to every bedtime story, every cookie baked, every music lesson, every Halloween costume made, every soccer game, every homework helped with. I hold every baby birthed and nursed and rocked, every hug, every boo boo kissed, every fever tended, every tear dried like jewels in my heart. I hold in me the winters we spent building snowmen and letting our dog pull the sled after inches and inches of snow. I breathe in all of that goodness between us, between me and them and it reminds me that I was able to still love from within my broken spirit.

It wasn’t that there was not enough love in me. It was that I didn’t possess the key to unlock the dungeon where my brightest light was being held hostage. When I could have given them my most beautiful Black womxn self, I was cowering under the internalized oppression of self-loathing for Blackness and anything associated with it. I had chosen a man who was all too happy to feed and water that self-hate because it fed and inflated his own whiteness and all of his other sicknesses. When I took those first trembling steps away from the marriage and life with him that was killing me, it was as though I was running through thickets under a moonless sky. It felt like an escape. It felt like I was breathing real air for the first time in my life and that at any moment it would be snatched away. Even as I strained toward life I carried my grief with me. I carry it still.

And never far from grief, here comes forgiveness, again, dancing around the edges of the scorched earth of those periods and moments in my life that were a pit of unknowing and anguish. Who deserves forgiveness? Who desires it? What purpose does forgiveness serve? And who benefits from it? These questions haunt my thoughts as I tell this story.

On this 5-year call, my daughter told me that she needed to forgive me. She needed, she said, to be able to be whole, to move forward and be the best mother she could be without my terrible mothering continuing to affect how she raises her two girls. I gave her the space to say what she needed and wanted to say in whatever way she needed and wanted to say it. Words of interruption sat right behind my teeth. I wanted to defend myself. I wanted her love and acceptance. I wanted to hug her and my grandchildren. I wanted to be all the mothers she was telling me I was not. I sat on the other end of the telephone line flayed open, present, bleeding. Above all, I prayed for stillness. I listened as she had her say. I listened as she prescribed solutions for my life and told me who I was according to her sight and beliefs. I did not cry until the call was over.

Forgiveness is the judeo-christian tenet that tells us we must release our tormentors from their debt to our misery by pardoning. Now, we also go so far as to say that forgiveness is not so much an act of releasing for the tormentor as it is an act of freedom for ourselves. Perhaps. Conventional methods of resolving past and childhood trauma will often tell victims that speaking forgiveness aloud to their tormentors will bring closure and the road for a person to move forward from the damage done to them. Maybe. I have come to understand that whatever choices a person makes that allow them to live their purpose with dignity and love are the ones that matter more than the adherence to doctrines set down by others who are far removed from the context of anyone’s here and now.

Published by Tea With Oya

Welcome to Tea With Oya. Oya, represents the aspect of the Universe that is Change administered through catastrophic events of every iteration. In the Yoruba Pantheon, Oya is the wind who levels everything in its path. They (The Orisa do not fit the gender binary. They are both, and neither male nor female.) are the lightning that splits trees, starts cleansing fire and burns it all down. Oya governs and ushers the souls of the dead hence they are called Boss Lady of the Market Place. Oya makes sure that you leave behind what does not move you along your path of becoming or they will take it from you by any means necessary. Only in the place left by destruction, where nothing old is left to cling to can new growth begin. Yet there is sweetness in her for those who understand the divine purpose of change. I write mainly to keep from losing my mind. Whether I am good at it according to the world's standards or not doesn't worry me so much as making sure I say what needs saying in the face of everything in white supremacy telling me I am irrelevant and in need of irradication. My life is in the margins of the intersections of race, gender, age, disability, and some I may not even know of yet, even as the elder I am. I claim my 64 years as a mark of honor--I am Black and still alive, I am a writer by necessity and survival. Compensation for my intellectual and emotional labor is requested and always appreciated. paypal.me/TBird847 View all posts by Tea With Oya

Oyansa fans her skirts and we are transformed.